Watching some sets of slides you can ask yourself “How did they ever do it?”

After reviewing projects from over a dozen years ago, we have come to the conclusion that nobody at that time was able to design such a assortment of pipes as is possible today.

Drawing a single slide is not a problem. We know where to start and where to end, a few loops, security verification and a slide model is ready. The second slide is not difficult either; We move it a little further away from the first and the chance of their collision drops significantly. However, it is a challenge to find the space for the third and fourth ones.

Projections, views, overlaps, multiple revisions. Long hours of calculating slopes and start levels. In order to be able to make complex projects like we do now, we had to spend a few long weeks doing all the necessary calculations. And if this was not enough, when all three slides were already placed, the fourth one no longer fit there and everything had to be done from scratch. Typically, such systems as we currently have were not designed in those days. Most of the archival slides consist of two or three distant pipes connected at the starting point. Currently, we can fit slides with the same parameters on almost three times a smaller area, which allows the investor to build an object that was once completely unattainable. 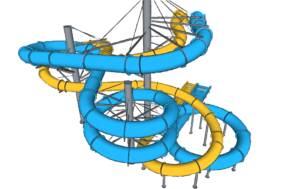 The fact that we model in 3D from the beginning of the design process may seem like a truism. For people from industries related to construction, this is a standard process. When we started working with slides we were surprised that there was no 3D software to model them. Sure, there are CAD programs for 3D modelling, visualization or manual insertion of elements, but this is post factum. The lengthy and laborious process of inserting segment by segment based on the proposed course is now in the past 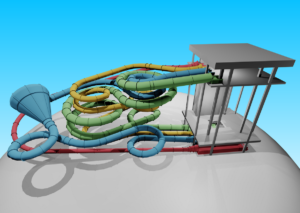 Smooth, spatial modelling of the course of the slide, taking into account the environmental conditions, came with our proprietary software. Ever since we made this software, we have come up with some new ideas, and interesting paths of development have appeared, making this process even more automatic.

You can learn more about it in subsequent posts.

Want to join the discussion?
Feel free to contribute!

This site uses cookies. By continuing to browse the site, you are agreeing to our use of cookies.

We may request cookies to be set on your device. We use cookies to let us know when you visit our websites, how you interact with us, to enrich your user experience, and to customize your relationship with our website.

Click on the different category headings to find out more. You can also change some of your preferences. Note that blocking some types of cookies may impact your experience on our websites and the services we are able to offer.

These cookies are strictly necessary to provide you with services available through our website and to use some of its features.

Because these cookies are strictly necessary to deliver the website, refuseing them will have impact how our site functions. You always can block or delete cookies by changing your browser settings and force blocking all cookies on this website. But this will always prompt you to accept/refuse cookies when revisiting our site.

We fully respect if you want to refuse cookies but to avoid asking you again and again kindly allow us to store a cookie for that. You are free to opt out any time or opt in for other cookies to get a better experience. If you refuse cookies we will remove all set cookies in our domain.

We provide you with a list of stored cookies on your computer in our domain so you can check what we stored. Due to security reasons we are not able to show or modify cookies from other domains. You can check these in your browser security settings.

These cookies collect information that is used either in aggregate form to help us understand how our website is being used or how effective our marketing campaigns are, or to help us customize our website and application for you in order to enhance your experience.

If you do not want that we track your visit to our site you can disable tracking in your browser here:

We also use different external services like Google Webfonts, Google Maps, and external Video providers. Since these providers may collect personal data like your IP address we allow you to block them here. Please be aware that this might heavily reduce the functionality and appearance of our site. Changes will take effect once you reload the page.

The following cookies are also needed - You can choose if you want to allow them: